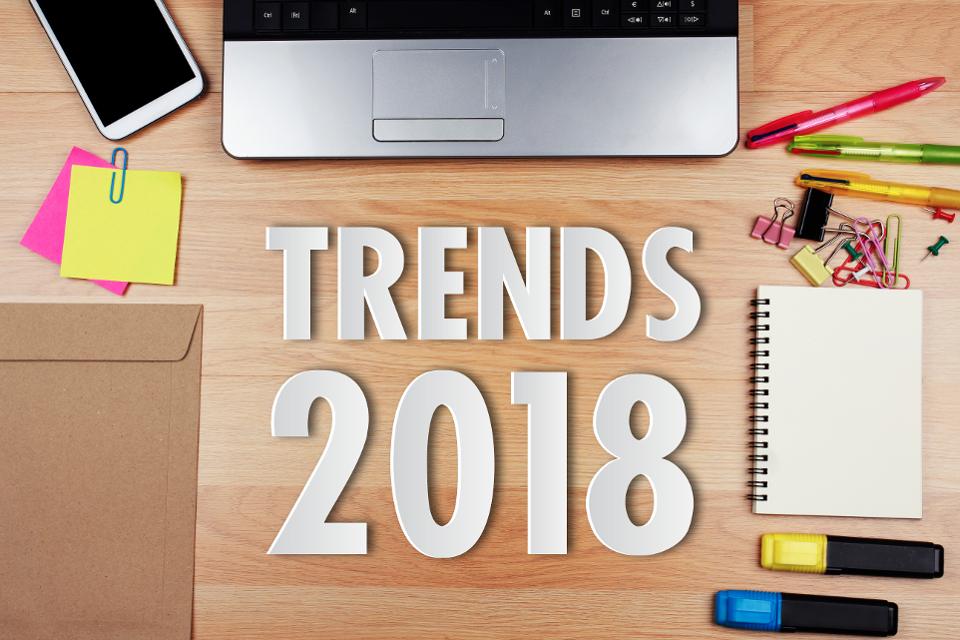 Just how dominant a business tool was social media in 2017? Despite being involved in an investigation by Congress, Facebook reported its highest earnings ever in Q3, up nearly 50% from a year ago. Its mobile ads are so popular that the platform is actually starting to run out of space for them, even though they’re charging more than ever. Meanwhile, the network eclipsed the 2-billion-user mark, now counting nearly one-third of the planet among its user base.

Behind these numbers is a growing realization among businesses that social media is the single most effective way to reach audiences, with teens (i.e. tomorrow’s consumers) now spending up to nine hours a day on social platforms. An insatiable appetite for video among users, paired with better technology for making, posting and targeting social updates, sees companies now spending more money on social and digital ads than on TV advertising.

These trends show little sign of slowing up in 2018. Here’s a glimpse into five key factors that will impact how businesses use social media in the year ahead:

Goodbye free reach on social media (for real). For years, companies’ organic reach on Facebook (the percentage of their followers who see company updates that aren’t “boosted” with ad money) has been dwindling, dipping as low as 2%. Now it seems Facebook may finally kill organic reach on the News Feed entirely. This fall, the network rolled out a new “Explore Feed,” a kind of second-class stream just for company updates. Testing has already begun in some countries to banish all company social posts from the all important (and increasingly crowded) News Feed over to Explore.

Unless, of course, you pony up. These latest developments are a final, firm reminder that Facebook is now a paid platform for companies, little different in this respect from traditional pay-to-play advertising channels like TV, radio, print or billboards. To reach an audience via the News Feed—any audience, at all—it’s going to cost you. Considering that 51% of companies currently struggle with lack of a social media ads budget, this may prove a harsh wake-up call in 2018. One silver lining: Facebook has pioneered some of the most precise ad targeting tools ever. (Wanna pitch to twenty-something soccer fans living in Phoenix who work in retail and like dogs? No problem.) So, at the least, ad money promises to be well spent.

Make more videos (but don’t worry about going viral). It doesn’t take a crystal ball to see that video is the future, not just of social media but of the Internet in general. By 2018, Cisco forecasts that 82% of all consumer Internet traffic will be video. Live and recorded video and video ads increasingly dominate our feeds across Facebook and Snapchat and are surging on Instagram, Twitter and even LinkedIn. Nearly half of businesses are already implementing social videos, with another 26% planning to implement in 2018.

Just one problem. In the race to earn video views and clicks, too many companies are missing the bigger picture. Ultimately, who’s watching your videos—and what they do after they watch—is far more important than how many people are watching. Going “viral” doesn’t mean much, after all, if you’re not reaching actual customers who want to buy something. One antidote to fixating on video vanity metrics in 2018: analytics tools that track conversions and highlight how video actually leads to the acquisition and retention of customers.

Those funny QR codes make a comeback (with a social media twist). This fall, Apple snuck an unexpected update into its newly released iOS 11: a native QR code reader. (You might remember QR codes—essentially, fancy barcodes that do things like open websites when scanned—from the ‘00s, when they were supposed to be the next big thing.) Now, all you have to do is point your iPhone camera at a code, and it’s automatically activated. Codes can be used to log into wifi networks (no more typing out passwords), make a purchase with PayPal and even send pre-populated Tweets and texts.

On a separate front, major networks like Snapchat, Facebook and even Spotify are increasingly pushing their own proprietary code technology onto users. Scan a Facebook Messenger Code, for instance, and a handy bot or customer service agent automatically pops up on your phone. Considering that QR codes are still one of the easiest ways to bridge the real world and the online one, don’t be surprised if you start seeing them everywhere in 2018—especially now that 700 million iPhone users have a scanner in their pockets.

Here comes the era of “millisecond marketing” (ready or not). Lots of basic social media tasks—from scheduling the optimal time to post something to finding catchy content to share—have already been automated. But in 2018, expect to see AI and related tools play an ever more important behind-the-scenes role in sharing messages. Case in point—emerging technology that enables testing hundreds of social media ad variations, simultaneously. Rather than having to “guess” which images and text will get the most clicks, users can automate campaigns so that the best-performing posts are instantly boosted to the biggest audience.

This is part of a larger transformation that’s seeing the cycle for creating, distributing and optimizing social media radically compressed. Inside the latest AI-powered tools, ever more complex algorithms are calling the shots and removing the guesswork about what marketing materials will lead to what results—and they’re doing so nearly in real time. For better or worse, what once took creative teams days (or weeks), is now being accomplished in a matter of milliseconds. In 2018, these tools should enable companies to reach bigger audiences with better targeted and more personalized messages than ever before—fulfilling the dream of truly “scalable” social media, provided you can keep up.

Not to be outdone, Adobe, Salesforce, IBM and Oracle have all embarked on a flurry of purchases and integrations to improve their marketing clouds with social media features. Underlying these improvements is a dawning understanding that social media provides businesses with a rich, real-time source of customer information—exactly the kind of data needed to power AI engines, like Salesforce’s Einstein, that lie at the heart of these clouds. In 2018, business users stand to be the big beneficiary of this software arms race, as marketing platforms find better ways to weave social media data and social media tools into their offerings.

The easiest prediction of all for 2018: change. Fueled by intense competition between networks to capture advertising dollars, social media tools and tactics will continue to evolve at a breakneck pace in the year ahead. Expect plenty of new features, new ad tools and brand new ways to watch video. For companies already fatigued by the onslaught of new technology and strategies, relief, unfortunately, is nowhere in sight. But for those that can keep up, social media may promise bigger audiences and more return on investment than ever.

Follow Me
Ryan Holmes
Founder and CEO at Hootsuite
I’m the founder and CEO of Hootsuite, the world’s most widely used social relationship platform, with 15 million-plus users, including more than 800 of the Fortune 1000 companies. A serial entrepreneur, I started my first business in high school, ultimately opening a string of ventures—from a pizza restaurant to a digital media agency—before starting Hootsuite. Today, I love building vibrant companies with strong cultures, as well as sharing what I’ve learned on the frontlines with other entrepreneurs and business leaders. I’m the author of the Amazon-best-selling guide to social media for leaders, The $4 Billion Tweet, and I’m also a global influencer on LinkedIn, Facebook and other social networks. I’m also proud to champion youth entrepreneurship through my organization League of Innovators.

Follow Me
Latest posts by Ryan Holmes (see all)

Is Your Business Technology Ready to Compete? Steps You Can Take Now

The businesses that lead in today's economy are increasingly becoming those that can pivot, adapt, and implement change almost as quickly as new threats