Have you given your brand a “personality test” lately? When you think of big brands that stand out, what comes to mind—just their product, or how their communications make you feel about them? It used to be that mass advertising was the way brands developed a personality, but that’s no longer the case. With today’s social communications being so important to a brand’s reputation and perception in the marketplace, finding a way to involve your friends and followers in building that personality is essential. Duane Reade: With over 60,000 Facebook Likes, over 661,000 Twitter followers and over 1,000 Pinterest pins, DR is the most recognized drugstore chain in metropolitan New York. Through its social channels it has become the “face” of New York by strategically fostering a love of the city and all its people, places and things visually. They actively solicit compelling photos from around the city (and give credit) to share on Facebook and Twitter. They also give tips on where to go and what to do in town, and sometimes super-impose photos of their drugstore products on New York backgrounds for fun. If you study their Facebook posts, you’ll see that the majority of their updates give some kind of value—not a blatant product push. This gives people a reason to like and interact with their posts, keeping them high in the newsfeed and top of mind. Mastercard: This big brand has capitalized on its “Priceless” campaign from years ago. They’ve definitely made a splash in social, with over 5.3M Facebook Likes and over 40,000 Twitter followers (not to mention a good YouTube presence). Using social to actively engage people and inviting fans to share their favorite “Priceless” experiences has been a masterstroke (pun intended), and the #LoveThisCity offshoot with its sweepstakes is generating tons of interaction. Mastercard definitely “gets it.” Dove: Dove has always been one of my favorites, because they understand the power of uplifting people. Their #WeAreBeautiful campaign strikes a chord with women everywhere. Also their “Dove Cares” campaigns that reach out to U.S. Military Servicemen and recent Father’s Day  #SuperheroDads campaign marks them as a company concerned with family issues. That kind of heart-felt connection REALLY resonates with consumers.

All three of these big-brand examples show how important developing a personality can be, and more importantly, involving consumers in the process of building and sharing that message. It humanizes the brand—gives them heart—and inspires people.

Granted, large brands have cash to throw at social campaigns and advertising—but the lesson on developing personality can be adopted by anyone, large or small. And that’s more important than ever these days because the online arena is getting more and more crowded. Even if you’re a one-person-band, you need to be thinking about developing a unique online personality, something that separates you from your competitors and helps you stand out.

So how can the little guy develop personality? Well, maybe you have a passion for collecting something that you can tie in. My quirky personality thing is fun socks—the louder and crazier the better. I take pictures of my sock-clad feet when I’m traveling and post them; it’s something I’ve become “known” for over time. It’s a fun part of my personal brand that strikes a chord with many of my friends and followers. I post them to all my social channels and have a Pinterest board… We Heart Socks. My company, Collective Bias has built it culture around family, friends and fun… so we have Collective Bias Family Dinners in every city we visit and invite all sorts of folks from business associates, to bloggers, to agencies and more. We have fun, and build relationships. We also #AwkwardStretch.

The important thing is to understand is that whatever you do in social channels, it should be genuine and a natural fit for your company. So start thinking of ways that you can involve your social audiences in something that’s uniquely you—something that will encourage them to want to interact with you and get to know you better.

Passing your audience’s “personality test” is often a good way to get a foot in the door that leads to developing that all-important Return on Relationship #RonR! 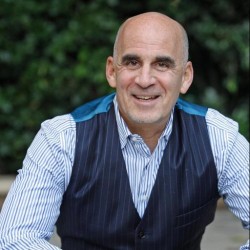 Ted Rubin
Ted is a leading social marketing strategist and in 2009 started using and evangelizing the term ROR: Return on Relationship™... a concept he believes is the cornerstone for building an engaged multi-million member database, many of whom are vocal advocates for the brand, like the one he built for e.l.f. Cosmetics as the Chief Marketing Officer between 2008 and 2010, and the one being built for the new updated OpenSky where Ted was Chief Social Marketing Officer until the end of April 2011.

Most Important Things to Consider Before You Start a Blog

Blogging has grown tremendously in the last few years. Currently, there are blogs for almost everything on earth – losing weight, fitness, DIY gardening,