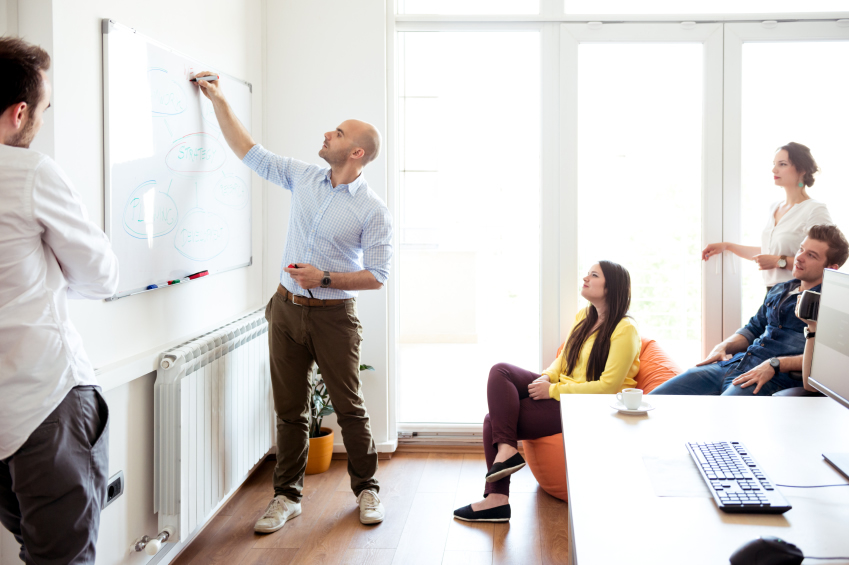 The idea of “agile” originated in the software development world. Developers, and the businesses that employed them, noticed that the traditional method of software development was too time-consuming and costly. Essentially, they would build an entire product and release it – a method sometimes referred to as “waterfall” development.

According to Agile Marketing, agile development adheres to the following creed:

That’s where agile marketing takes its cues. Like their brethren over in product development, agile marketers don’t go for the home run every time. Instead, they collaborate and take a fast-moving tactical approach, working only on the highest-value marketing activities, learning and failing quickly and iterating constantly. Agile marketing can deliver some stellar returns to its practitioners. Here are some key things you should know about implementing an agile marketing department in your business.

Get ready to sprint
Marketer Gizmo explained that agile marketers work in “sprints.” This means that instead of slogging through a long-term marketing campaign – running a marathon, you could say – they instead work in short but focused and intense bursts. This means picking a value-added task, setting a hard deadline and just getting it done.

Essentially, you’re thinking in terms of testing something quickly, seeing if it works, then moving onto something else rather than running one massive campaign where you don’t know if you’ve succeeded or failed until months after the money is spent.

Embrace failure as much as success
You’re going to be moving fast and testing multiple small-scale campaigns and marketing tactics in a very short amount of time. This means that you’ll probably find that some of your ideas simply don’t work.

In traditional marketing, a bad idea can lead to hundreds of thousands, or even millions of dollars being completely wasted. In agile, however, you’re not banking on any one idea. You’ve got dozens or hundreds of ideas in the works, and your chances of at least a few of them turning into something worth pursuing are pretty good. Further, if a few don’t work out, it’s not a big deal. You’re testing everything on such a small scale that the price of failure is low in any one instance.

You can’t sweat it too much if a couple of your ideas turn out to be complete duds. Make sure you and your team are ready to fail quickly and move on.

Learn quickly
As an extension of the last point, your agile marketing team should be able to take the lessons learned from a failure and use it to help hone your best practices. Knowing what doesn’t work is a big step toward figuring out what does.

The agile mindset is iterative. You run an experiment, measure the results and use it to generate further questions and hypotheses. You’re always testing new things, incorporating what works into your processes and mercilessly discarding the rest.

“There’s a huge aspect of change management involved. Teams that have been embedded in certain processes, or those companies with a hierarchical ‘command and control’ environment or culture, are those who are unwilling to think about change,” Jascha Kaykas-Wolff, chief marketing officer at BitTorrent, said to Proof HQ. “They’re used to a CEO or CMO telling them exactly what to do, and they have more struggles making the change than any team, regardless of size. I don’t think size is the critical factor you have to look to; it’s really the emotional readiness of the team, and that’s most often tipped off by who the CEO/CMO is.”

Make sure your marketing team is ready for agile
Chances are, you’re not building an agile marketing team from scratch, but rather working with your existing team to overhaul your processes. Proof HQ noted that this can be a jarring culture shift. It’s often hard for your employees to juggle so many small projects at once. Your team needs not only the professional chops to handle the agile method, but also the emotional readiness to tackle this paradigm shift.

Empower your team to be agile
The success of an agile marketing department hinges on management allowing the employees to make decisions without needing to go through endless layers of bureaucracy to get something signed. Econsultancy pointed out the example of Nokia, whose social media marketing team was able to quickly jump on a big-time topic trending on Twitter and gain major visibility for their brand and products.

Apple had just announced that it would be releasing new, vibrantly colored iPhones – very similar to the ones that Nokia had been making for a while. As soon as Apple made the formal announcement, Nokia tweeted a picture of its phones with the caption “Imitation is the best form of flattery.” In the body of the tweet, Nokia simply wrote, “Thanks #Apple ;)”

“It’s an all or nothing proposition”

Because the team was allowed to make moves quickly, they were able to hijack a trending hashtag and steer the conversation over to them. This was a brilliant move, but it was only made possible because Nokia gave its social team the latitude to make decisions on the fly. The chances of failure were definitely there, but agile isn’t about endless deliberation and research. It’s about spotting an opportunity and going for it.

Don’t treat agile like it’s all or nothing
One of the major misconceptions you’ll see as you read more about agile is that many pundits talk about it like it’s an all or nothing proposition. You don’t have to be either 100 percent agile or not at all. You can still run traditional campaigns, do a lot of research and be deliberate with certain things.

This balanced approach is definitely best for something like content marketing geared toward lead generation. You wouldn’t rush out a whitepaper, or an in-depth webinar. Some things are still worth taking your time with, though you should certainly still treat these as learning experiences as well.

But for something like quick-hit social posts, why not let your team take the reins and be responsive to fast-moving trends? Shouldn’t your creative team be able to push out a timely infographic if they see a need for it? These are the kinds of things you should be putting in the hands of your marketing talent and letting them work their magic as they see fit.

An important checklist to start the conversation in your organization as you move toward a scalable hybrid cloud environment. Read more: https://www.coxblue.com/what-to-consider-when-exploring-implementation-of-a-scalable-hybrid-cloud-environment/

Think about your favorite indie bookstore, local wine store, or foodie shop. What makes it so appealing? Maybe you rely on the staff for