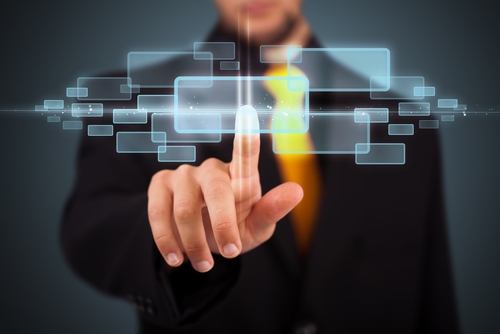 There is almost no aspect of the modern business that’s independent of technology. Whether it’s your core product or your customer service, the latest cutting-edge tech can not only help to boost your efforts, but shape your strategies in many ways. If you don’t keep pace with the changes, it doesn’t matter whether it’s your offerings or your efforts in marketing your business – you’re putting your operation at risk.

Jeremiah Patterson is founder and chief executive officer of Taptl.com. The company is a tech manufacturing startup, and their central product is a transparent LCD touchscreen called Noir 46. The company’s made substantial progress since its inception – much like Patterson has in his career. Previously, he was working as a counselor for the Air Force, and the venture represented a new direction. Moving toward success has required him to adapt and learn new strategies, and each one has been infused with important technological decisions.

Finding where to start
The core of Taptl is a transparent touchscreen. Patterson didn’t have an idea for a company, but he knew he wanted to go into business for himself, so he sought out potential options. This required learning a great deal about technology, he said.

“About five years ago, when I was newly married, I began thinking about ways to make extra money,” he said. “So I had an idea of cars with very small projectors inside that would project various advertisements on the windows as they drove around. Needless to say, that didn’t go very far, and I had to go back to the drawing board. I ended up having a meeting with Samsung at the Consumers Electronic Show and figured out that transparent touchscreen TVs will be the wave of the future. So I did a lot of brainstorming and came up with just such a TV screen.”

Whether one starts with the entrepreneurial spirit, as Taptl did, or an idea, it’s clear that technology is a central part of most startups. Yet it’s not just if they offer some cutting-edge product. It can be in almost any other way. Even if you’re offering a more personal service, a lack of understanding of the latest technology will simply ruin any chance of competing. No matter what your core service or product is, you need to be aware of how it compares – or interacts – with the rapidly advancing technological landscape.

Working with others
So many companies will need to find not just proper clients, but allies in parts of their business. For many companies, this means working to get all the necessary accessories up and running. From computers to mobile solutions, it’s important to either hire workers in house who are able to appraise the situation, or to look for outside partners who know the landscape. Even when it comes to advertising, a keen ability on the latest social media offerings is essential. Patterson didn’t have much prior knowledge in these areas, so he looked for someone who was more technologically adept to facilitate in marketing his business.

In fact, he uses technology and social media even in recruiting – and in ways that would seem counterintuitive to some people. He tried the common resume routes, such as Craigslist and Monster.com, but that yielded only one suitable candidate. Now, he uses a different tool.

“Right now, I bring people through Instagram, which sounds a bit weird. But being able to see into a person’s life, how they operate, what they like and don’t like, whether they are a family person, etc. gives you a better sense of who they are, as opposed to who they would want you to think they are,” he said.

It’s a creative use of modern technology, and one that shows just how important it is to understand the landscape. A person completely unfamiliar with social media could not come up with this idea to focus on Instagram, and they could be losing out on valuable information about potential employees.

Reacting and adapting
Taptl’s transparent touchscreen is a very particular product, and with such an item, there are many manufacturing needs. Negotiating this process means working to find technological solutions at every turn, even in ways that you may not be familiar with. Patterson’s prototyping stage lasted a long time, and the original product was defective. He had to work hard to get it into optimal condition.

“When I first started selling these transparent displays, I basically sold them just from Samsung. I didn’t do anything to them – just sold them as they were. And they were absolutely horrible. When they come from factories, there is not much you can do with them, and I didn’t necessarily know too much – I just wanted to know if there was a market out there for them. And the customers came back to me and said, ‘What is this thing? I can’t see anything!'”

Here, Taptl’s basic abilities with technology came in incredibly handy. He was able to take the feedback in a positive way and work to improve the product, even though so many customers could not navigate the process themselves.

The next customer, the next step
Patterson has teamed up with a marketing firm to increase his presence, both on the Internet and through social media. The company acquired its very first customers through an early version of its website, which featured information and videos, but now wants to boost its online profile. The marketing partner will not only do this, but get the product into showcases as well.

“We now have displays in some high-end dealerships in NYC – Land Rover, Range Rover, etc. – in different high-traffic areas where people can see it and interact with it, and it’s also going to be at the Super Bowl and a couple of events leading up to the Super Bowl,” he said.

As for the next step, Patterson believes his company will be able to stay ahead of the technology curve.

“Everything that I have talked about so far is hardware, but at the core we are actually a software company,” he said. “We are developing a software platform because we think that in the future transparent interactive displays will be ‘the thing,’ but currently, there is no software for such displays because they don’t exist. We are basically starting up the market for it so that when Samsung and LG and others come into this market in the next 4-5 years, they are going to say, ‘OK, we want to put these transparent interactive displays on the market, where are the software applications for it?'”

From top to bottom, Patterson’s entire business model is predicated on proper use of technology. What has been your greatest use of technology for your business? Was it in an unexpected area?