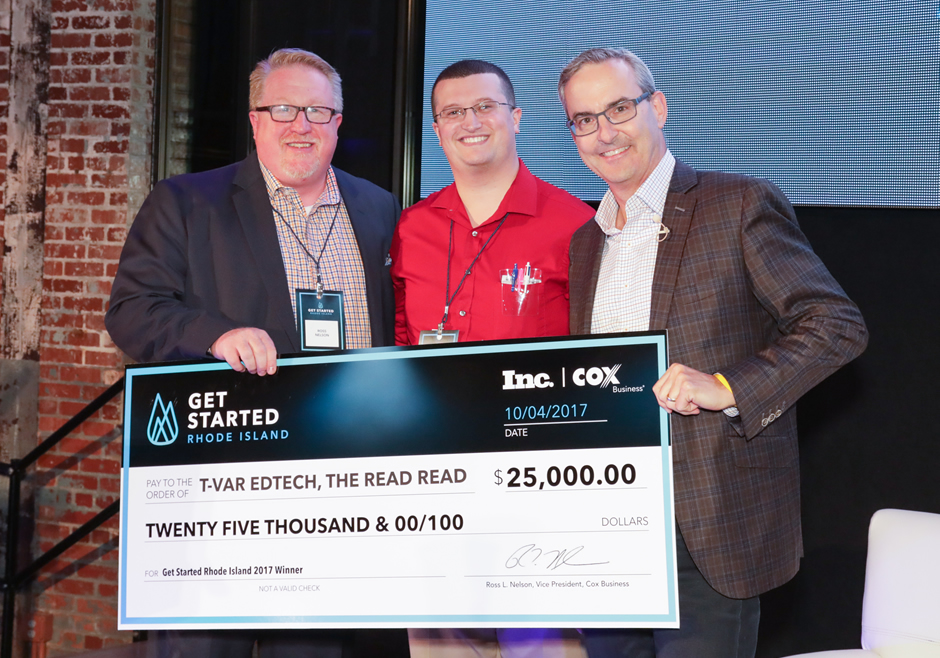 Many students are finding themselves pigeonholed as “non-readers” by schools and programs unequipped to meet the challenge of teaching them to read and write. Considering all of the innovative technology abundant in modern society, though, shouldn’t we have a solution for this problem?

Tavares had been working and volunteering as a reading specialist for almost 15 years when he came to the realization that his students weren’t retaining information in a way that made them capable of making any real progress on their path to literacy. “I realized that in between meetings with my students they had no way of practicing, so they were actually getting worse at the fundamental skills,” he says. Tavares estimated that 85% of the time he spent with his students was reteaching those basic skills.

“I searched for a product that could automate that process so that it wasn’t the bulk of what we were doing when we were together, and so that they could practice independently,” he says. “But all of the products available didn’t meet the need, and they didn’t meet it by a long shot for various reasons. So I set out to develop the product that would automate best practice.”

Tavares caught the judges’ eyes at the Get Started Rhode Island competition with his well-developed product and a clear passion for his work. Winning this competition, and others like it, is a vital part of his plans for future growth at Tvar Ed Tech, which he refers to as not a company first, but an “impact organization.”

“We’re doing our best to bootstrap,” he says. “Winning competitions like this allows us to avoid the now very pervasive angel investor rounds and focus rather on continued prototyping, traveling to meet with superintendents and principals at schools for the blind, and doing product demos at different conferences throughout the country.” The ultimate goal is to make The Read Read as affordable as possible, providing accessibility for anyone who needs it. By minimizing things like fiduciary commitments to investors, Tavares is able to work towards that with laser focus.

He plans to utilize the media portion of the prize package to continue to educate people about the literacy crisis, particularly as it pertains to the blind and visually-impaired. “We’ve seen an outpouring of support from people who do a little more research on our site and come to learn more about the problem, learn more about our solution,” he says. “And we’ve had many people actually following up with financial contributions to that cause. And 100% of those go toward donating these devices to kids who are blind and visually-impaired.”

The School of Google

You might assume, as the inventor of a tech device, that Tavares is an engineer. But that’s not the case. “I had a bit of basic logic background from the study of philosophy, so I understood things like programming structure even though I didn’t do much formal coding,” he says. “But in terms of hardware, I didn’t have much knowledge at all. I think I could wire a battery and a light bulb.”

When working on the first prototypes of The Read Read, Tavares says he relied on “the school of Google and YouTube” and online forums where he was able to engage in dialogue with users who possessed the skill set he was looking to build.

He also benefitted greatly from his contact with experts at some top-tier universities, including his alma mater, Harvard, where he won a seat in their Innovation Lab as well as a fellowship. “That allowed me to continue working on The Read Read over summer,” he says. “And that’s important because doing the work there meant that I was able to maintain intellectual property over the device while using the rich array of resources that are available through the I-Lab.”

In addition to not taking on any outside funding, Tavares has maintained the growth of Tvar Ed Tech, thus far, as a solo founder. He currently has no employees, but what he does have is a great support structure. “I’ve had an immense outpouring of support from professors—experts in different fields such as education, universal design for learning, engineering, and electronics—at some of the most prestigious universities in the world,” he says.

He also partnered with Perkins School for the Blind to pilot his device. “The staff there are the foremost experts in the world on blindness,” he says. “So I knew that going there, I wouldn’t just get affirmation…I would get criticism as well. And that’s what I was looking for. I wanted the harsh feedback that would allow me to make the device better.”

Eagerly seeking out that criticism is what Tavares attributes virtually all of his success to at this point. “A lot of people call it constructive criticism, and that can be a euphemism for nice words, and maybe a sandwich of compliments,” he says. “But I let people know very bluntly that I only want the bad; it’s the only thing that’s gonna help me get better.”

While The Read Read is currently being marketed towards those with visual impairments and blindness, Tavares has a plan to widen the scope in time, with a goal of providing access to the device for both children and adults in need of a tool to help learn and practice these fundamental skills. He has no plans to sell the technology or to make an exit. “I see this as more of a lifelong project,” he says.

The technology behind The Read Read makes it possible to teach not only braille and phonics, but numeracy, mathematics, music, and even the foundational skills of computer coding—all key components of early childhood education. “I’ve seen the impact at small scale,” he says. “And I have the background knowledge to know that there’s no reason why this couldn’t scale. This kind of device, the economies of scale, the production methods that we’re using…we’ll be able to provide the device at a very low price eventually.”

For Tavares, the motivation to press on despite the turbulent nature of life as a solo entrepreneur is found every day in the faces of the students he’s impacting. He speaks of a blind Haitian immigrant student who was struggling with pronunciations due to his native French tongue, but who used The Read Read to sound out a word, and the fog lifted. “The smile that emerged, it really defied the architecture of his face,” he says. “It actually went from ear to ear. And he finally got this thing that these teachers had been trying to communicate to him for months…these different sounds. He got it in an instant.”

Those knowing smiles. That sense of accomplishment and progress. Tavares wants it not just for a few people, but for everyone who may have been overlooked by traditional teaching methods. “When you look at the impact of literacy on life outcomes, job prospects, all of that, you’ll see that there’s tremendous potential behind The Read Read and what we’re doing with it,” he says.

Unified Communications: An Essential Strategy to Future Proof Your Business

The world is changing rapidly. So are the ways we communicate and the communication technologies we use. New platforms and apps are enabling businesses