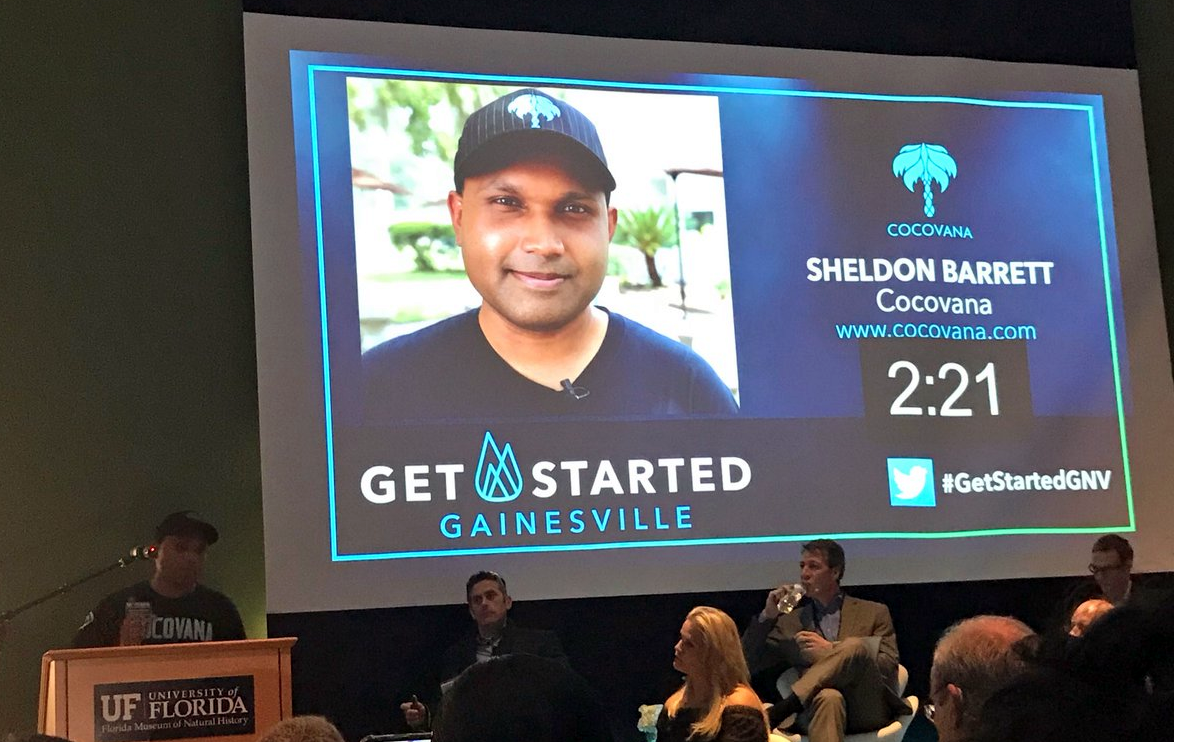 As an increasing number of Americans work to embrace healthier diet and lifestyle choices, certain products are enjoying massive boosts in popularity. Chiefly among them is the humble coconut. Though it is prized for multiple applications, people are particularly gravitating towards it for coconut water, packed with nutrients and boosting the power to help with disease prevention.

While there are plenty of pre-packaged brands on store shelves, the most affordable and nutritious option remains the fruit itself. But will consumers really purchase whole fresh coconuts to reap those benefits when the process of securing the water from them is so complicated (and often dangerous)? What if there were a product that removed all the guesswork and made that process as quick and easy as screwing the top off a bottle?

Barrett, the American-born son of a Jamaican father, was early in his college career when he was diagnosed with high blood pressure. He ended up taking a semester off as he worked with doctors, trying out multiple medications in an effort to bring his levels under control, but failing to do so.

He began drinking fresh coconut water, and the high amounts of vitamin C and potassium finally helped him to get back to a normal baseline. While he had coconut trees in his South Florida front yard, he was unable to open the fruit himself, instead relying on his father to do the dirty work him. “My dad has always opened up coconuts with a machete,” he says with a laugh. “For some reason, it seems like all Jamaicans know how to use machetes, but I—like most Americans—do not and didn’t want to cut my hand off.”

Necessity Is the Mother of Invention

An engineering student at the University of Florida, this dilemma ignited a drive in Barrett to create a tool to quickly and safely open a fresh coconut—no sharp blades required. He sketched out his initial design on a hotel notepad while on vacation in New Orleans and built his first prototype as soon as he returned home to Fort Lauderdale. “The first design that I came up with was very basic,” he says. “I got a hole saw from Home Depot and a wrench for the handle; then I put a small corkscrew wine opener through the center of it. That was, basically, the first prototype of Coconut Twist. It wasn’t very pretty, but it got the job done.”

Today, after many rounds of refinement and testing, the Coconut Twist is on its seventh iteration—the version that landed Barrett the win at the Cox Get Started Gainesville competition. Having now been “streamlined for consumer,” he crafted the intricate design on his computer before personally machining the sample by hand. In a nod to the power of persistence, Barrett had actually applied for the competition in both 2015 and 2016 but had been passed over both times. His dogged determination paid off this year.

He impressed the judges at the Gainesville competition and is eager to move forward with utilizing the expansive prize package that came along with his win. “For the $10,000 in cash, I’ll be using that to increase the quantity of my first production run of Coconut Twist,” he says. “As for the video production package and the media exposure, I’m going to leverage that for sales—pitching to different retailers and customers—and I believe that backing will help to legitimize the business as well.”

Making major strides as a first-time entrepreneur hasn’t stopped Barrett from continuing to pursue his degree. He is in his final year of a five-year program at UF and is slated to graduate in the fall of 2018 with a major in Industrial and Systems Engineering and a triple minor in Business, Entrepreneurship, and Sales Engineering.

He estimates that he typically works about 100 hours per week, with 70 of those being dedicated to running Cocovana and 30 being allocated for studying and schoolwork. “From the Cocovana side, that includes the engineering aspect (working with the manufacturers, building prototypes, visiting the machine shops, meeting with engineering advisors) and the business aspect (meeting with business advisors, writing emails, working on the business plan, learning the retail vendor process),” he says.

It may seem like a difficult balance, but to Barrett, there was never a question. “I wasn’t interested in doing the trendy thing of dropping out,” he says. “It’s all so important to me. I wanted to finish with a degree that’s actually worth something.” He encourages other budding entrepreneurs to foster their ideas while in school and points to the support of The Gator Hatchery—a student business incubator on UF’s campus—as a driving force in his success. “You have all the resources of your University at your disposal,” he says. “Once you graduate, those things are very expensive, out in the real world.”

While hoping to revolutionize the coconut industry and eventually grow Cocovana into a well-rounded tropical lifestyle brand, Barrett remains primarily motivated by the goal of making clean living accessible for everyone. “Being able to drink fresh coconut water helped me take control of my health,” he says.  “That’s something I want for everyone else, too.”

But don’t expect to catch him lounging around some island oasis in 20 years. Barrett is committed to the entrepreneurial way of life, which he quickly and easily defined in one word: exciting. He plans to continue innovating and creating, in whatever form that manifests. “I love the flexibility of scheduling and being able to call my own shots,” he says. “It’s really nice being able to do what you want, on your own time. That freedom and independence is something I really value.”

In the end, he attributes his continued success with Cocovana to a stubborn refusal to give up. “I don’t believe in a ton of luck. I believe in a lot of hard work,” he says. “You never know when you’re going to be successful. It could be right around the corner.”

For more information on Cocovana or to sign up to be notified when the Coconut Twist hits the market, visit www.cocovana.com

Where Are They Now – Get Started Tucson Winners Dr. Steve Goldman and Jordan Lancaster of Avery Therapeutics