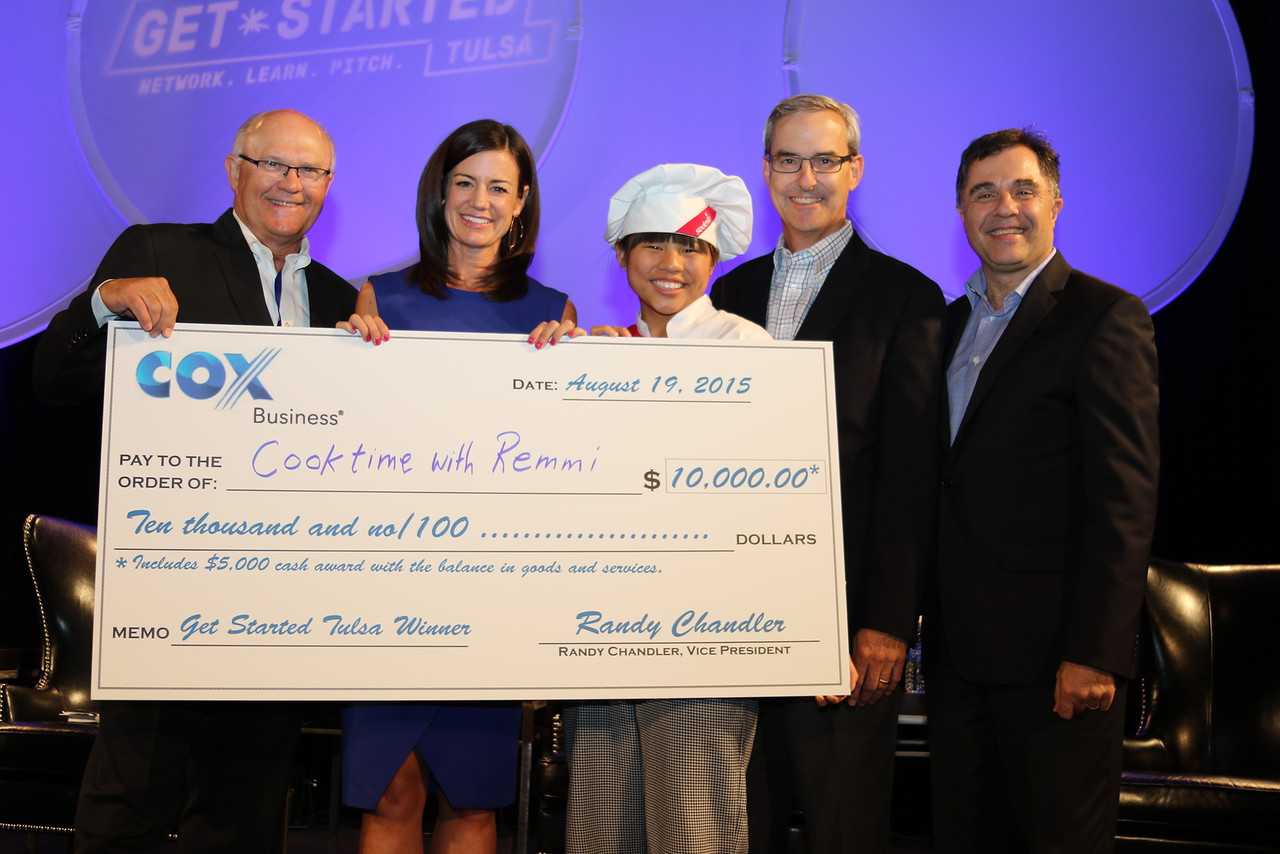 Two of Cox Business’ “Get Started” 2015 winners are headed to Austin, Texas and SXSW in March, for a few days of fun, start-up networking, interviews, and an appearance at a private VIP event held by Author, TED speaker and CEO Bryan Kramer.

By age four the average child is just learning how to handle a spoon and fork. By the time she turned four, Remmi Smith was already in the kitchen cooking alongside her mother. By the time she was seven Remmi could make a full meal on her own.

From that point on, faster than you can microwave a burrito, she wracked up a string of accomplishments: she became an Internet sensation for her cooking videos; a cable TV host; an award-winning cookbook author; and student ambassador for food service company Sodexo, where she gives the company’s 500 executive chefs a kid’s perspective on nutrition.

Remmi, now all of 15, is bringing her boundless energy and passion for food to what she calls “a literally enormous problem”: battling childhood obesity by encouraging kids to snack smarter. It almost seems inevitable that her CHEF (Cook Healthy Exercise Frequently) Program won first place at Get Started Tulsa, the latest in a nationwide series of “Shark Tank”-like competitions at which local entrepreneurs pitch their ideas to a panel of experts.

“She has remarkable poise and confidence for a high school student,” said Ken Kraft, a judge and vice president of marketing for Cox Business, one of the event’s sponsors. “She really shined in the Q & A, and she was passionate, but measured, with a fact-based business plan. It’s remarkable that someone so young is focusing on a way to address a problem that affects people in her own demographic.”

A No-Calorie Surprise in Every Box

Remmi’s Get Started presentation stressed two points: By 2018, Oklahoma is expected to have the highest level of obesity in the country, according to a study by Emory University. The percentage of obese adults in the state is projected to rise from 44.3% in 2013 to 56.1% in two years. The problem is just as pressing for children, and parents are challenged to find healthy, convenient snacks that fit into ever-more-busy lifestyles.

Remmi and her sister pondered those issues and came up with a fun, interactive way to address them. The CHEF Club includes a monthly subscription that provides members with a box of healthy snacks to eat throughout the month, a recipe card from Remmi’s cookbook, and a health-related “surprise” from a sponsor, such as a jump rope.

“We knew we wanted to include an exercise component,” Remmi said. “I just love running because I wake up with so much energy that I have to do something with it.”

Club members will also receive a monthly video newsletter with healthy tips, as well as a cooking demonstration that encourages them to have fun in the kitchen.

Remmi plans to partner with food manufacturers to provide different non-perishable items that can be left in the car, an acknowledgement of how much time parents spend taxiing their kids from soccer to ballet to school.

Get Started Tulsa had a record 70 entrepreneurs submit proposals. The other four finalists offered a wide range of innovative ideas, from a carbonated cold-brew coffee to a new way to detect sleep apnea to a plan to providetransitional employment and housing for women with prior felony records.

“Because Tulsa is such a big oil-and-gas town, I expected a lot of entries related to that industry, but there weren’t any — the ideas were astoundingly far-ranging,” Kraft said. “It shows the spirit of entrepreneurism is alive and well all across the country.”

Remmi found the Get Started event invigorating, and validating. “Before the presentation, you sit at tables where people can come up and talk to you,” she said. “People told me how much they liked the idea and gave me lots of suggestions on how to make the snack box better and told me I should look to introduce them to after-school programs. There was so much strong feedback it really validated the concept for me.”

For winning Get Started Tulsa, Remmi will receive a prize package valued at more than $10,000. “I didn’t think I would win, but I knew it be super fun and a great opportunity,” she said. “When I won, it was a good shock moment. My mouth literally would not work.”

But that didn’t last long, since Remmi travels the country, speaking to young people about entrepreneurialism and healthy eating. Just like her Twitter feed, her normal speaking pattern is filled with exclamation points.

“My mom says I don’t get nervous when I speak in public; she gets nervous for me,” she said. “I love talking to people, I love food facts, and I love smiling teeth! And I’d love nothing more than to help people see how much fun healthy cooking and healthy eating can be.”

Torrey Tayenaka keeps a book of ideas he has for new businesses. It’s a thick book, because ideas come to him all the time.

Torrey Tayenaka keeps a book of ideas he has for new businesses. It’s a thick book, because ideas come to him all the time.
All the time. One day while washing his hands, for example, Tayenaka was struck by how the auto-activated sink shut off the water whenever he pulled his hands away.

Living in drought-stricken Southern California, Tayenaka, a serial entrepreneur, wondered if that concept could be applied to an activity that wastes a lot of water in homes everyday — showers.  The average American family uses about 40 gallons of water a day showering, and studies indicate that almost a third of that is squandered, such as when people check email as they wait for the water to heat up.

Tayenaka gathered a group of fellow marketing/advertising people he’d met at a hackathon he sponsors at which professionals donate their time to develop marketing plans for worthy causes. They all concluded that a smart shower, which would provide just the exact amount of water you need without disrupting “the shower experience,” was the most promising concept in Tayenaka’s vast idea book.

“We decided to develop the smart shower as a part-time gig, putting up very little investment,” he says. “If we couldn’t develop the idea in three weekends, we’d walk away from it. My belief is you should have a fast time-to-failure so you don’t waste your time on things that won’t pan out.”

Three weekends later, the group had a name for the smart shower (“Eva”), a logo, a website, and an industrial design. They revealed their project on Kickstarter, the crowd-funding site, even though they hadn’t yet developed a working prototype.

“My feeling was that developing the shower shouldn’t be too hard,” Tayenaka says. “We weren’t inventing ground-breaking technology, like the Tesla. We were leveraging technology that already existed, such as sensors and valves that turn water on and off.”

The components may have already existed, but the end result is nonetheless impressive. The elegantly designed Eva device mounts between the wall and the showerhead. It brings the water up to a desired temperature and then shuts off the flow until it senses you have come into the shower. When you stand directly beneath the showerhead, wetting your hair or rinsing off soap, Eva puts out 100 percent water flow. When you step back, to shampoo or shave your legs, Eva throttles the water down.

You can also set audio reminders to keep your showers briefer, and even control and track your usage with a mobile app, gauging how your water usage compares to others with a smart shower.

Tayenaka figures Eva can cut water usage in half, thus paying for itself within a year. Still, people warned him that not having a working prototype would cause Eva to be dismissed as “vaporware”– a pipe dream. They were wrong: The smart shower was so compelling and timely that it garnered plenty of press, and distributors from around the world began calling.

Tayenaka refined his plan and presented Eva at Get Started OC, the Orange County, California, leg of a nationwide series of events at which local entrepreneurs pitch their ideas to a panel of experts. “Over the past year, we’ve seen that entrepreneurism is alive and well,” says Ken Kraft, a judge and vice president of marketing for Cox Business, the event’s creators. “Ingenuity is not limited to big cities or technology. We’re seeing amazing ideas come from everywhere and in every field.”

The judges were impressed by both the idea for the smart shower and the well-thought-out business plan behind it. “The Eva team was very poised and answered questions very confidently,” Kraft says. “The judges liked the environmental angle and the fact they were already thinking internationally.”

Tayenaka received a $10,000 prize package for winning the Orange County Get Started event, which will help his team bring Eva to the world. He’s signed a letter of intent with a Chinese manufacturer and plans to start producing Eva in six to eight months.

Even though the product has not yet been launched, Tayenaka is already thinking about introducing other water-saving devices, such as toilets, sprinklers, and dish washers. “We don’t want to be a one-trick pony,” he says. “Our intent is to build a brand, not just one product.”

He doesn’t just want to build a brand, however-;he also wants to make a difference. “I have a lot of ideas that might make a ton of money,” Tayenaka says. “But at this point I want an idea that can make an impact on the world, something that I can proudly tell my grandparents about.”

How Sponsoring Local Events Can Generate Exposure For Your Small Business

If you're like most entrepreneurs who are leading small startups in today's climate, you probably don't have a lot of money in the budget