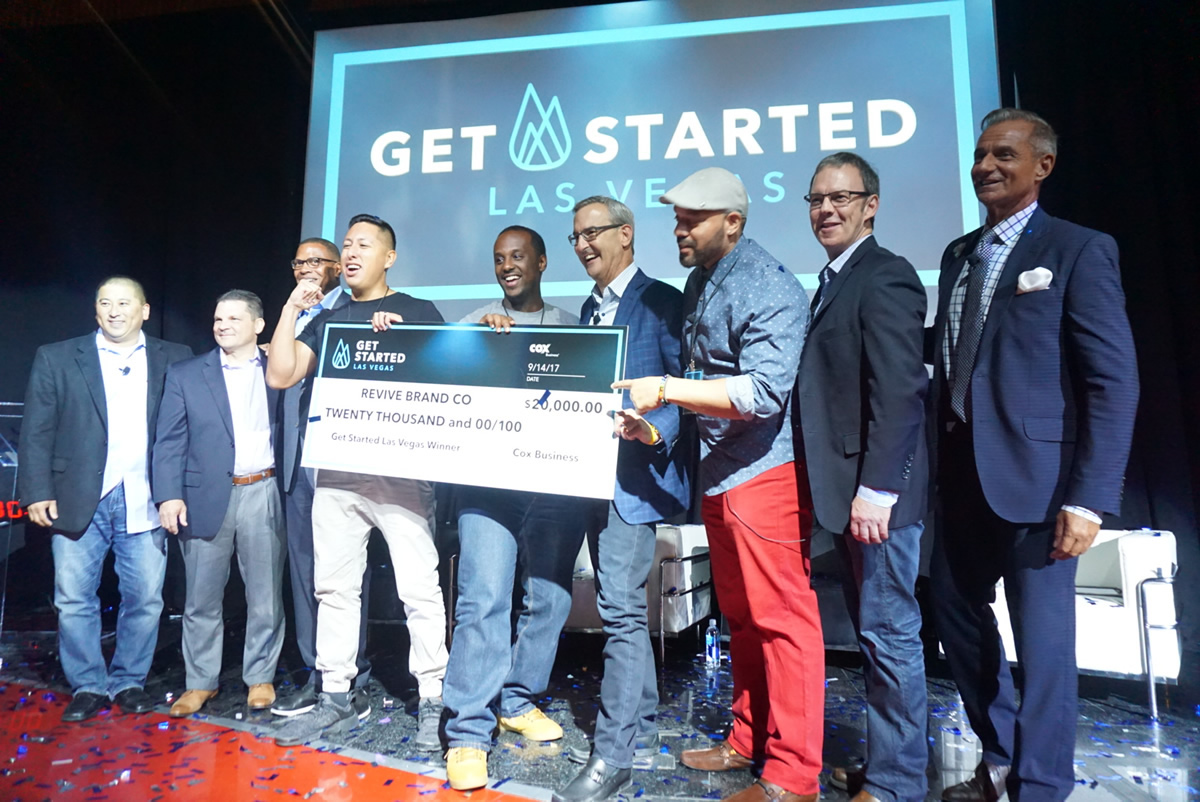 The market for sports apparel and accessories is a crowded one. Companies jockey for the endorsements of megastar athletes, hoping their seal of approval will bring that coveted buzz and, with it, worldwide brand recognition.

But what if, instead of leaning on the big name, a company put their focus on tapping into the strength and resilience each of us carries within ourselves? What if their message was that everyone, everywhere, can impact their world every day by embracing four simple words: Wake Up and Win.

Revive, as a project, has been decades in the making. All three partners keyed in on “sacrifice” as the defining word to describe their entrepreneurial journey. But the energy and focus they brought to their presentation at Cox’s Las Vegas Get Started event impressed the panel enough to send the guys home with the big prize.

While the cash portion of the prize is a great bonus, it was really the breadth of the winner’s package that drew them to pitch in the first place. “As soon as I saw that there was media support and branding assistance in addition to the monetary aspect, it was a no-brainer for us,” Jonathan Santos says. “We needed to enter. I knew it was going to help us really take the business to the next level.”

The trio plans to make use of the prize package to refine their focus and make a big push to get the story of their brand identity and mission out to the masses. “We’re planning to use the package to legitimize the way that our business communicates online and in person,” Jonathan says. “Winning this competition and getting these resources is going to allow us to ground the direction of the company a little bit more, so we’re able to tell and show people exactly what it is that we’re trying to do.”

Revive, ultimately, is a product of determined, tireless persistence. Jonathan had always wanted to create something big. His high school notebooks were filled with drawings of products he dreamed of making. But how to pull the dream from the page and make it a reality? “We didn’t have any resources. We didn’t have funding. We didn’t have the connections,” Jonathan says. “You could say we were just banging our heads against the wall trying to figure out how to do it.”

Jonathan met Medin at the College of Southern Nevada when he was paired with him for a final class project that called for them to develop a business plan. It was a chance to put some real structure to this idea that had been brewing for years, and Medin proved to be a perfect fit with Jonathan and his brother and business partner, Cesar.

In the hopes of getting the trio’s dreams off the ground, Cesar stepped in and offered up a possible solution. He had a sewing machine and he figured he would simply teach himself to sew and they would tackle this thing on their own. “He just started taking our drawings and doing some research into how things were created,” Jonathan says.

Once they had a functional example of what they wanted, they met with a one-man manufacturing company in California to learn more. “It helped Cesar visualize and actually see the process of creating products—the fabrics, the build, everything,” Jonathan says.

The team spent the coming years grinding and pushing to get their products out there. Their focus early on was primarily on sports bags and accessories. Reaching a point of cash-strapped exhaustion, though, they began to feel uncertain about the future of Revive. What would come next would change their lives—and their brand—forever.

From the beginning, Revive has had no outside investors. The trio has worked other jobs and taken out small personal loans to build the business, and all the sales they made were fed right back into the company to keep in going. In the midst of a financial rough patch, the guys were also undergoing a bit of an identity crisis. “We’d gotten some sales, and people liked our products, but we’d never had anything that connected with the customer base and really energized them,” Medin says.

With all of this swirling in his mind, Medin—who handles all the marketing for Revive—was working one day at a local Starbucks when he was confronted with a harsh reminder of the fragility of human life. A man was shot right in front of him and, despite Medin’s attempt to administer CPR, the man died in his arms. “It really impacted me,” he says. “I got really depressed, but what I ended up doing to change that was going out and volunteering, providing community service, and spending time with others who needed the help. It made me happier and more energized. And I changed as a person because of it.”

Given a sense of renewed clarity after this harrowing ordeal, Medin came to the Santos brothers with a proposal for a new slogan for Revive: Wake Up and Win. “To me, it signifies you serving—getting out of your head and going out and being an integral part of the community,” Medin says. “It’s about making people feel like they’re truly cared about. It’s how we approach everything, from our daily internal meetings to the customer experience. It came from us bumping our heads over the years and finally stumbling onto something that was organic and true to us, but that also resonated with people.”

With years of struggle under their belts, the guys seem to have finally found the path to bring Revive to the place they’d always hoped it could go. Cesar is working around the clock on innovative new designs and Jonathan is mentoring young entrepreneurs and providing them with the guidance to get their own dreams off the ground. All the while, Medin is out in the community, tabling at events and speaking at schools, spreading the message of Wake Up and Win. They’re focused, driven, and ready to take on the world and, ultimately, make it a better place.

When asked what advice they would give to their younger selves now that they have the benefit of time and experience, the response was enlightening. “In all honesty, I would tell myself to continue doing what I was doing at that time, because if it wasn’t for all the situations that I’ve been put through in my life, and learning along the way, I wouldn’t be where I’m at right now, learning the skills that I’m learning,” Cesar says. “It took all three of us. It took Jonathon’s idea and Medin’s persistence to make us wake up and question what we were really doing with our lives. In the end, it’s about what we can do better for not only ourselves but our family and our community.”

So, your business has had some initial success. You’ve put together an excellent team and you feel like you’re onto something with your business