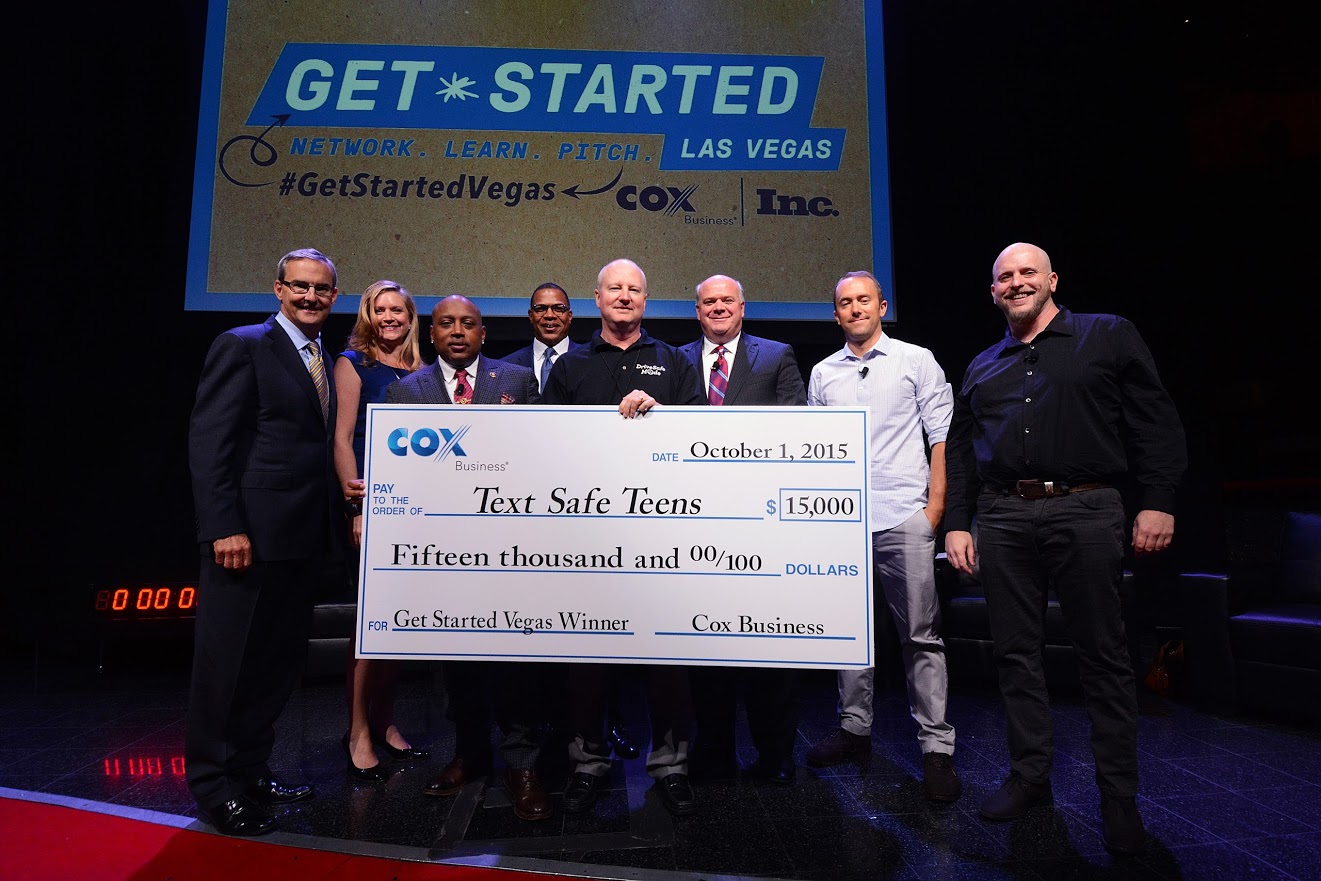 While driving down the freeway a teenager glances at his phone to read a text. It’s a quick and all-too common act, and potentially deadly, because in those few seconds his car will travel the distance of a football field before he puts his eyes back on the road. Given that a quarter of teenagers respond to a text message at least once while driving, it’s no wonder that traffic crashes are the leading cause of death for teenagers in the United States.

The potentially life-saving app captured first place at Get Started Las Vegas, one in a series of high-energy pitch competitions held around the country in which local entrepreneurs present their ideas to a panel of experts. Cox Business created the series to help inspire local entrepreneurs and provide them with cash and resources to take their ideas to the next level.

Connected to His Mission

Wilde was drawn to his venture, as many entrepreneurs are, by a combination of personal experience ad fortuitous networking. Years ago his wife Heather was struck by a car as she crossed the road; the driver was talking on her car phone at the time. Injuries from the accident forced Heather to leave NASA’s astronaut program.

Later, she introduced Leon to Phil Randazzo, a long-time entrepreneur, who was looking for speakers for a program he ran, American Dream U., which helps educate veterans about how to start their own businesses. Wilde, a Navy veteran and early employee of Evernote, the well-known note-taking app, proved to be not only a logical choice as a speaker but also as a business partner.

“When we met, Phil told me about these rudimentary ideas he had for an app,” Wilde said. Intrigued, Wilde joined Randazzo’s Text Safe Teens company in January as its new tech-savvy CEO.

In its current iteration, the DriveSafe Mode app shuts down Android phones, except for emergency calls and authorized numbers, whenever the device is moving at more than 5 mph. With the iPhone version, parents can receive a notification via email whenever the driver’s phone is in use in a moving vehicle, and they can shut the phone down by logging onto a web site.

A second app, called SchoolZone Mode, disables phones during set times like school hours. This can address problems like cheating on tests and cyber-bulling, which often involves teens harassing each other using smart phones.

“They have a strong business model,” says Ken Kraft, a Get Started judge and vice president of marketing for Cox Business. “And they’re further along than many of the other finalists, who are just in the initial stages of their companies. They’ve already had 100,000 downloads of their app on iTunes.”

The judges for the event, which took place at the Palms Casino Resort, included Daymond John, founder & CEO of FUBU global lifestyle brand and one of the stars of the ABC hit television series “Shark Tank.” Some of the Get Started finalists were a little star-struck as they made their pitches to an entrepreneurial celebrity, but Wilde proceeded with aplomb, adeptly fielding questions about his venture.

“He had a good solid pitch and he was very poised,” Kraft says. “He was a very seasoned type of guy, and his whole operation had a high maturity level.”
Wilde says the prize money will go toward developing a “mirror” app for the DriveSafe Mode that will make it easier for parents to monitor their children’s use of smartphones and allow them to, among other features, shut down their children’s phone without having to log onto the web. The mirror app could also help make adults safer drivers—nearly two-thirds of teens report seeing their parents text while driving . United by the app, a family or any group of friends could keep each other accountable for driving safely.

Wilde has plenty of other ideas on how to expand his business. In addition to the basic free DriveSafe Mode app, he’d like to add a paid version that adds additional functions, such as allowing the phone to access safe applications while driving (audio navigation, for example). He’s also exploring extensions to the company’s business model. For example, insurance companies could offer the app to policyholders and give them discounts if they resist the temptation to use their phones while driving.

“Too many people are dying because of phones being used while driving,” Wilde says. “It’s a big problem, and it’s gratifying that an illustrious panels of judges believes we can be part of the solution.”

8 Productivity Hacks You Should Implement in Your Office