Food is a universal bond. Whether it’s a recipe from a beloved family member or the memory of a meal enjoyed with friends, the act of nourishing our bodies has always had powerful ties to our shared narrative as human beings.

Taking that principle and transforming it into a life’s work is a lofty goal, to be sure. But what if painstakingly creating treats by hand with local, quality ingredients could be both a profitable business venture and a path to ultimate self-fulfillment? 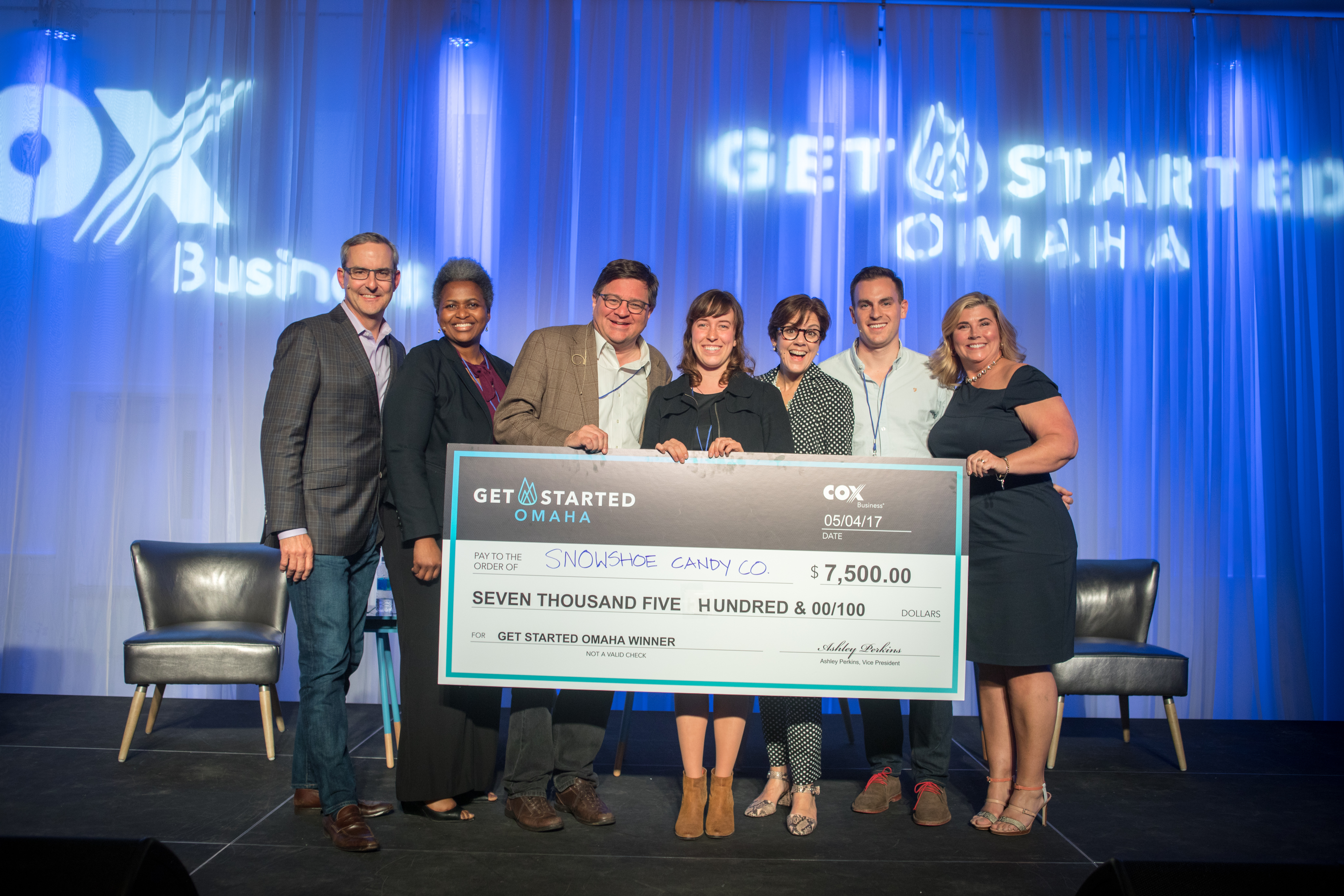 In 2009, Ali Clark’s grandfather took her into his kitchen and taught her how to make his signature caramels. Eight years later, she has transformed a love for creating these sweet treats into a full-fledged business in Snowshoe Candy Co.

She impressed the panel at the Get Started Omaha competition enough to take home the top prize. For Clark, who took the big step of quitting her day job earlier this year to focus on growing Snowshoe, this win couldn’t have come at a better time. “This is a big year for growth for us and this win was such a positive affirmation that we’re moving in the right direction,” she says.

Clark plans to utilize the monetary portion of the prize package to invest in an artisanal candy cooker. “My season runs October–March, so I have some time to explore different options,” she says. “I hope to have invested in it by September so that I can iron out the kinks and launch into the new season with that piece of equipment.”

In addition to the cash prize, Clark is eager to delve into the media portion of her winner’s package. “I’m really excited about the media package in terms of putting together promotional videos. That’s such a foreign thing to me; I wouldn’t have even known where to start! I’m really excited to leverage their expertise to help with some new plans I have for this year,” she says.

For Everything, There is a Season

It may seem a bit odd to discover that Snowshoe Candy Co. operates only six months out of the year. But for Clark it makes perfect sense. “I named it Snowshoe Candy Co. because I wanted to restrict myself to keeping it seasonal to winter,” she says. A major part of this decision is that Clark and her husband also operate their own farm business, Little Mountain Farm, in the spring and summer months, and Snowshoe’s “season” works as a natural complement to their farm schedule.

Clark often runs into customers who are confused that she sells both wholesome vegetables and candies. “I feel like perhaps as a culture we have a different relationship with sweets than we used to. Sweets are a luxury food; they’re not something we need to survive, but it’s a special treat,” she says. In the summertime, Clark likes to encourage her customers to focus on all the fresh, sweet fruits that are growing and doesn’t find herself personally craving candy. “The seasonality of this candy company means having something small to celebrate and savor and enjoy. So for me, from a philosophical standpoint, that’s a motivation,” she says.

From a business standpoint, Clark benefits from not having to worry about things like humidity and temperature control in production and distribution (which would arise if she was producing and shipping in warmer months). “The aspect of scarcity that is created by having a season also means that people get really excited when I open, and stock up before I close for the year,” she says. The limited season ultimately allows her flexibility to engage in other projects. “As a creative person, I’m constantly looking to change it up, so I feel like I’m really done wrapping caramels by the time March rolls around,” she says.

Many entrepreneurs struggle with work-life balance, and Clark and her husband Scott have worked to find a way to create that in their own lives while operating two small businesses together. “You have to accept that you are going to be the living, breathing embodiment of your business,” Clark says. “I am my business inside-and-out. It’s a complete extension of myself.”

For Clark, the key is intent. “Be respectful of your personal time, because your relationships—which are your support and your backbone—can get strained,” she says. “And, if you let that deteriorate because of a business, it’s really difficult to get it back.”

Her biggest tip for those hoping to start their own business is to be honest about the gaps in your knowledge and to recognize your own weaknesses. “You can make anything your reality if you put everything you have into it,” she says. “But you have to be able to ask for help. You can’t do it all on your own, and no one expects you to. Ultimately, people like helping other people!”

For Clark, making candy is about more than satisfying a sweet tooth. She holds a degree in economics from Marquette University in Milwaukee, where her father is a professor of the same discipline (her brother also practices in the field). When she moved to Omaha after college and became involved in community farming, she had a moment of concern that perhaps she had wasted her time studying economics. But then her grandfather handed her a cookbook entitled Handmade Candy, a farm community-sourced book of sweet recipes from 1970.

Recipes came largely from farmers’ wives and she noticed that many were credited as home economists. “I had a revelation that those people are managing a home and managing the goods that are produced and consumed. It was a new vantage point for me to think about the homemaker lifestyle in economic terms,” she says. It also made her realize that food gives us all a common base to draw from. “Food is a universal and it can bridge people’s differences,” she says.

Clark frequently engages with her customers on a personal level when they share stories of their family making certain sweets and how having those again can ignite such fond memories. She plans to delve more into these connections in the coming months on the Snowshoe Candy Co. blog. “In my job, I have opened myself up to receive those stories and people are sharing them with me. And I want to share them with the world because they’re special and it’s a part of our history and our cultural narrative to share those things with each other,” she says.

At the end of the day, what was once a hobby has developed into a passionate and well-rounded business for Clark. “Yes, I have customers and my customer base is growing, but this can be meaningful work as well,” she says. “I don’t know how I got here, but I’m so glad I did. All these little pieces along the way that didn’t seem to fit together, they really did.”

Being a network administrator for a K–12 institution can be a tall task. Hackers, malware, and other malicious attackers are constantly trying to break