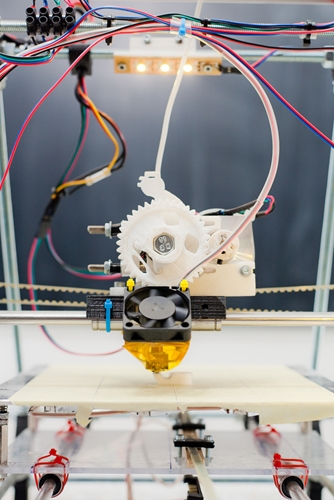 Every spring, #SXSW culls through thousands of submissions and whittles them down to the 130 or so best independent films of the year, which it then showcases for the world to see in Austin, Texas. This year, one of the best such films was “Print the Legend” – an engrossing documentary from producer Steven Klein and filmmaker James Clay Tweel that explores the innovative thinking behind 3D printing, a new technology that’s rapidly on the rise.

Once a generation or so, a transformative piece of technology comes along that changes everything, from your home life to the way you go about managing your business. While it may not always get much play in mainstream media conversations, 3D printing may well ultimately be remembered as the most impactful new creation of our current era.

“Print the Legend” explores the people behind 3D printing, their backstories and their aspirations for the future of the technology.

What is 3D printing all about?
Mankind has long had the capability to manufacture new products out of plastic – everything from toys and games to complex industrial devices. But with 3D printing, we now have a way to make new products that’s cost-effective and easy for anyone to pick up.

Max Lobovsky, one of the co-founders of 3D printing startup Formlabs and one of the stars of “Print the Legend,” refers to this idea as one of “personal fabrication.” In other words, anyone can make whatever product they want, and the process doesn’t need to be scary or unattainable. The hardware and software can be affordable, and the technique can be easy to learn. 3D printing gives the power to the people to make whatever their hearts desire.

There’s a technology called “stereolithography” that makes it all possible. From there, numerous innovators like Lobovsky and Makerbot Industries executive Bre Pettis have the potential to branch out and tackle ambitious new goals.

How big can it get?
There’s no telling how much the world of 3D printing will grow in the years ahead. For a frame of reference, industry expert Barry Schuler early on in “Print the Legend” compares 3D printing to the advent of the smartphone. iPhones and Android devices have more computing power than the entire world had access to just 40 years ago, and they fit right in our pockets. If a phone can become that advanced, that quickly, there’s no telling what 3D printing might do.

How will we remember the innovators?
In “Print the Legend,” filmmakers Klein and Tweel have high hopes for the leading thinkers behind 3D printing. They anticipate that people like Pettis and Lobovsky, the leaders of the small startups currently championing the technology, will eventually be remembered the same way that legends like Henry Ford and Steve Jobs are today.

That time may still be far off. Right now, those business leaders are still just starting out – growing their businesses, acquiring venture capital, building up media exposure. But before long, we may come to realize that 3D printing, much like the car or the personal computer, is a technology that’s changed the world dramatically.