An overwhelming number of Americans visit a local small business at least once a week with slightly more than a quarter (27 percent) patronizing small businesses twice a week. According to the 2017 Cox Business Consumer Pulse on Small Businesses, only eight percent of survey respondents don’t visit any type of small business in an average week.

Consumers may have a stronger sense of familiarity with the small business owners and employees who work in those businesses, according to the findings. However, survey respondents selected local support and convenience as the top reasons they go the “Main Street” route. When selecting their top three reasons for shopping and supporting small, the run-down ranked as follows: 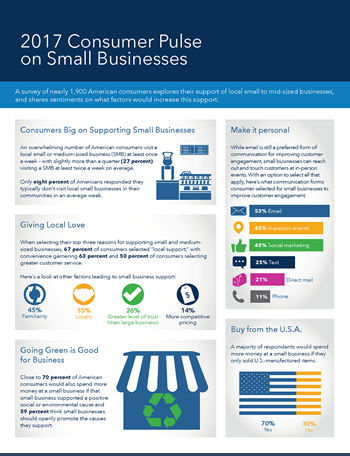 When it comes to shopping small, the price apparently doesn’t have to be right as only 14 percent of respondents said “more competitive pricing” was a top reason for supporting small business.

“These survey findings show that Americans are overwhelmingly united in their support of small businesses regardless of the so-called things that divide us,” said Steve Rowley, executive vice president of Cox Business. “Most consumers want to do their part in supporting the American workforce and economy and understand their collective patronage of these establishments is a key component of building stronger communities.”

Digital Transformation: Why IT is More Important Than Ever to Small and Midsize Businesses

The pace of digital innovation is growing exponentially and, even if you think you are on top of things, it’s always worth asking yourself